You are going about your day, finishing errands, listening to music or trying to figure out what is the thing you can’t remember as you have a feeling you forgot something, and some random person tells you to smile. Even if you are in an uplifted mood, the last thing you want to do in such a situation is to smile.

This woman on Reddit shared how not only did she not want to smile, but she put the man who addressed her into his place creating a little story of a huge tragedy happening in her life, which left the intruder speechless. 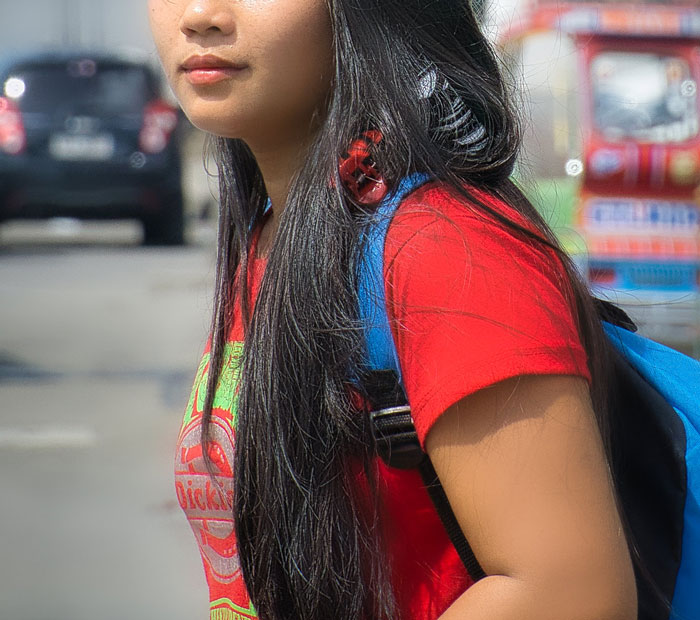 The Original Poster (OP) shared her story to the Petty Revenge subreddit where people can rejoice “small victories over those who’ve wronged them.” Revolutionary_Ant209 said that she was walking and thinking about all the things she still had to do and what she could already cross off of her to-do list.

She described her face as being neutral, meaning she wasn’t smiling, because who does when they are running errands and rushing to finish them, but she wasn’t frowning, either.

However, a man heading towards her was of the impression the woman was in need of cheering up or wanted a woman to look at him pleasantly, so the only way he could think of saying so was “Smile, it could be worse.” When Bored Panda reached out to the woman and she revealed that she get such remarks regularly. Although, not every week, “but often enough for it to be a regular annoyance.”

Such a command, as if she was a dog who was told to sit, really triggered the OP, so she thought she would teach the man a lesson and quickly thought of a scenario where there’s no way someone would walk around smiling. 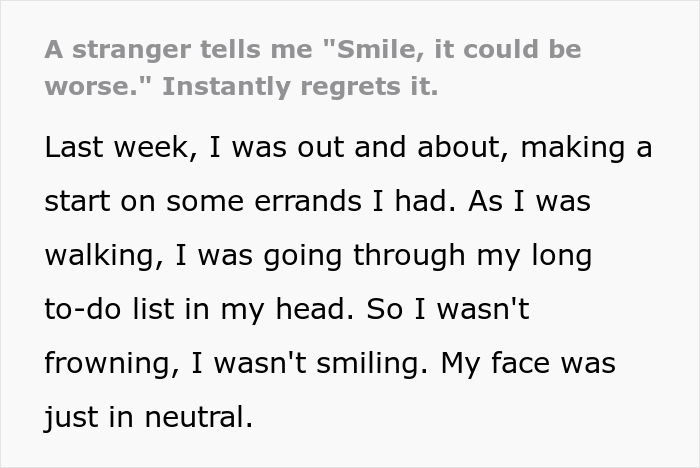 When Revolutionary_Ant209 told the man that her parents got into a car accident and she lost both of them – a lie, but one that could possibly be someone’s actual life – the man was too stunned to speak, realizing how insensitive and unthoughtful his remark was and not finding something sensible to say. He turned around and walked away, clearly wanting to escape the situation as soon as possible.

The woman explained that she lied to the man because she is simply annoyed with people who think they can have control over others emotions because you never know what the other person is going through. If they are sad, they need to feel that emotion and overcome it in their way, on their terms and in the time they need to.

In the comments, the woman revealed that previously she just ignored such people, but after one man told her to smile the day after her middle brother took his life, it just sparks a rage in her. She talked about the situation in more details with us as well, “the day after I found out my brother took his own life, a man on the bus told me, ‘Smile, love, it might never happen’. It hit hard and I struggled to keep it together until I got to my stop. The moment the bus was gone I crumbled and burst into tears. And I’m sure the man meant well. He didn’t know my brother had died. But that’s the point – you don’t know.”

But a man approaching her thought she needed cheering up, so he tried to encourage her to smile, reminding her that it could be worse

The anniversary of the woman’s brother’s death is nearing so she guesses that this was what prompted such a strong reaction at that moment, but she doesn’t think she did anything wrong, “I’d prefer he learn the potential consequences of what he said from me than somebody going through trauma who he might hurt with his words, whether he intended it or not. And he’s obviously not too traumatized because he wished me good morning a few days ago, and I’ve seen him chatting to passers by.”

She gave another example of a situation when there was no need to come up with a lie to teach the person requiring a smile a lesson, “Sometimes a comment meant well can hit the wrong way. My sister in law was even told ‘Cheer up, it’s not that bad’ when she was in hospital following a miscarriage at 22 weeks. She was devastated.”

Having had such experiences, the woman wasn’t surprised at how many people shared similar stories in the comments, but it saddened her nonetheless.

Revolutionary_Ant209 was very active in the comments replying to people’s thoughts and she expanded on the topic of trying to cheer up someone by telling them to smile. She said that there is nothing wrong with striking up a conversation with a stranger, wishing them a good day, complimenting their outfit or even smiling at them, because it does actually make your day more pleasant.

She commented, “I don’t have an issue with anyone trying to spread the cheer or being friendly. I don’t even have an issue with people wanting to make people smile. But I think if you want somebody to smile, you should do something to make them smile. Pay them a compliment. tell a joke. And if you can’t think of anything to say to make them smile, sometimes just smiling at them works – smiles are contagious.”

What she has a problem with is that people try to cheer up others when they don’t know what they are going through in such a patronizing way. Also, it’s not necessary to be happy all the time.

Actually, she realised that the phrase the man told her was “harmful because it promotes toxic positivity. We can’t always be happy. Sometimes you need to be sad. Telling somebody to smile if they’re sad invalidates their feelings. It doesn’t allow them to process their feelings properly, which can lead to problems.”

It’s hard to image a scenario where invalidating someone’s feelings will make them feel better and smile, so the woman decided to teach the man a lesson 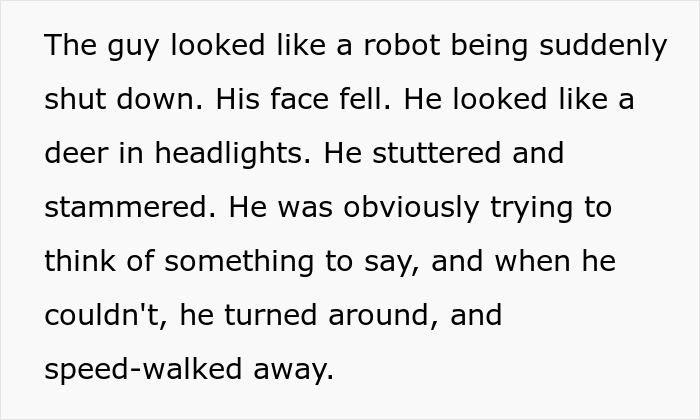 It seems that being told to smile most often happens to women, especially when you look at the criticism towards famous women not smiling enough in the media. According to a survey conducted by Byte, 98 percent of women had been told to smile at least once in their life and 15 percent of them hear this demand at least once a week.

It happens most often in the workplace, but it’s quite common in public and even at home or during family gatherings. 62 percent of women say it’s at least slightly inappropriate to tell a woman she needs to smile and 56 percent of them indicated that the remark came from a man.

The survey also showed what emotions the women felt when they were told to smile more. The most common way women feel is demeaned; they are also annoyed, offended, angered and stressed. It may surprise someone, like the man from the story, but the most common reactions to being told to look more positive are negative.

She lied to him about her parents getting mortally injured in a car accident, suggesting she has nothing to smile about 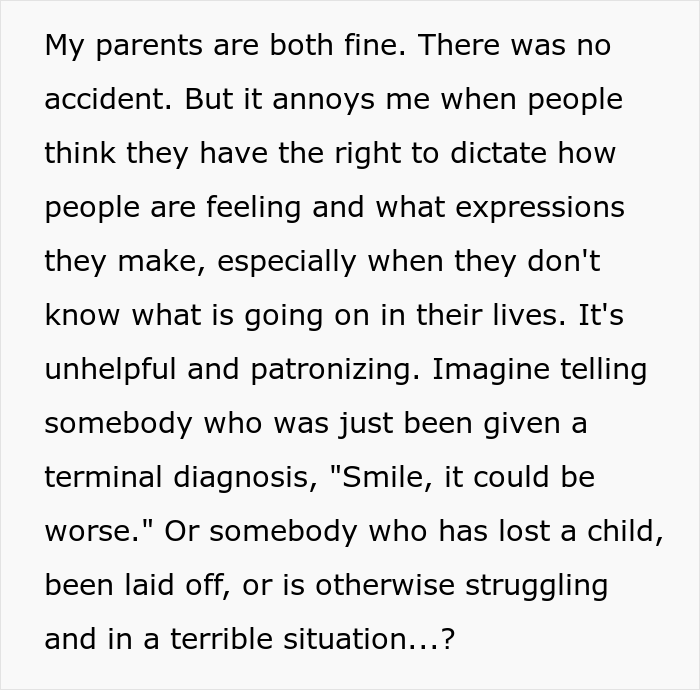 The reasons behind people wanting women to smile usually aren’t because they actually care about their well-being. According to Bustle, “The demands on women to smile are diverse, and usually signal broader demands on their energy and position: be docile, be acceptable, be accommodating to male desire, be polite, be subservient.”

Smiling makes people look more friendly and agreeable in general, but women are required to look like that a lot more frequently. As Women’s Health put it, when women do not conform to the script society has written them, they are corrected. And people who tell women to smile just lack empathy, not recognizing how offensive their request is. 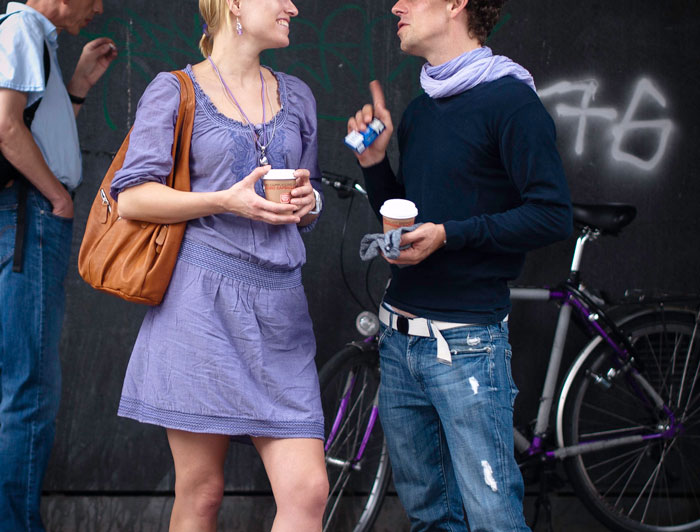 It’s clear that being told to smile when you don’t feel like it or your face just looks like you’re sad or angry all the time when it’s relaxed isn’t pleasant. But it seems that it is harder to explain to people who make those demands how hurtful and disrespectful such language is than just create the worst scenario you can to make them feel bad for even talking to you.

How do you feel when you are told to smile? Where does it happen most often? What is your usual reaction? Do you ever try to teach the person to stop doing it? Let us know your thoughts and experiences in the comments! 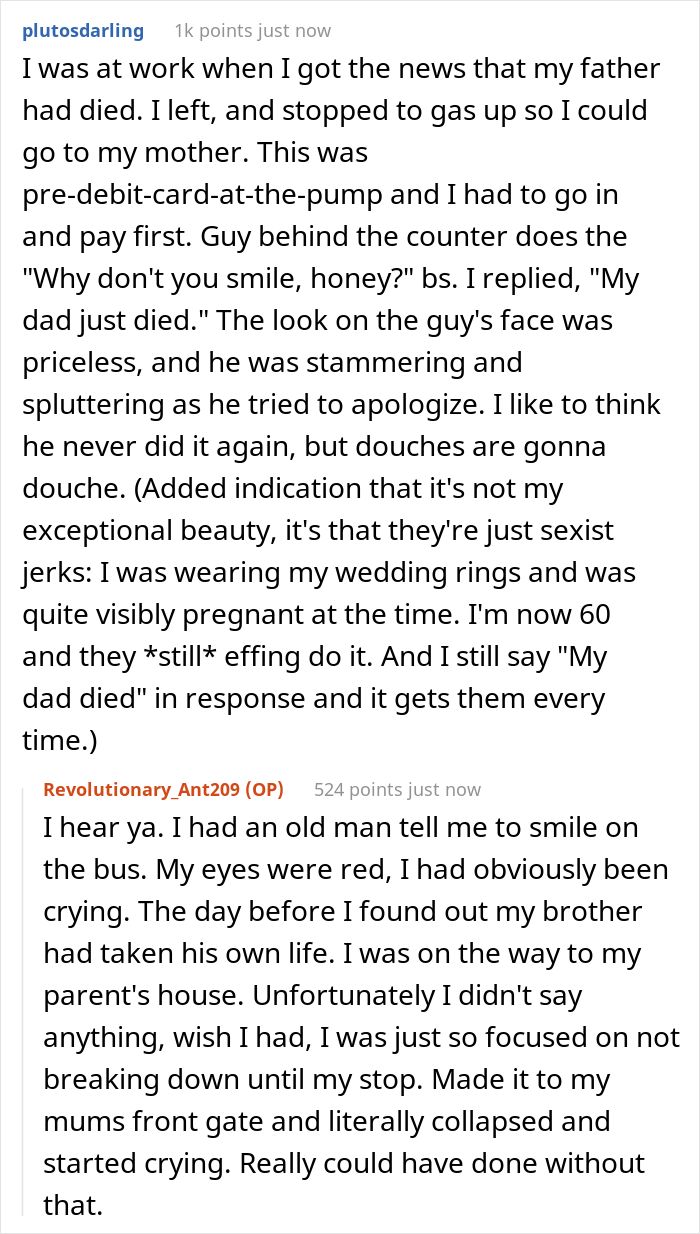 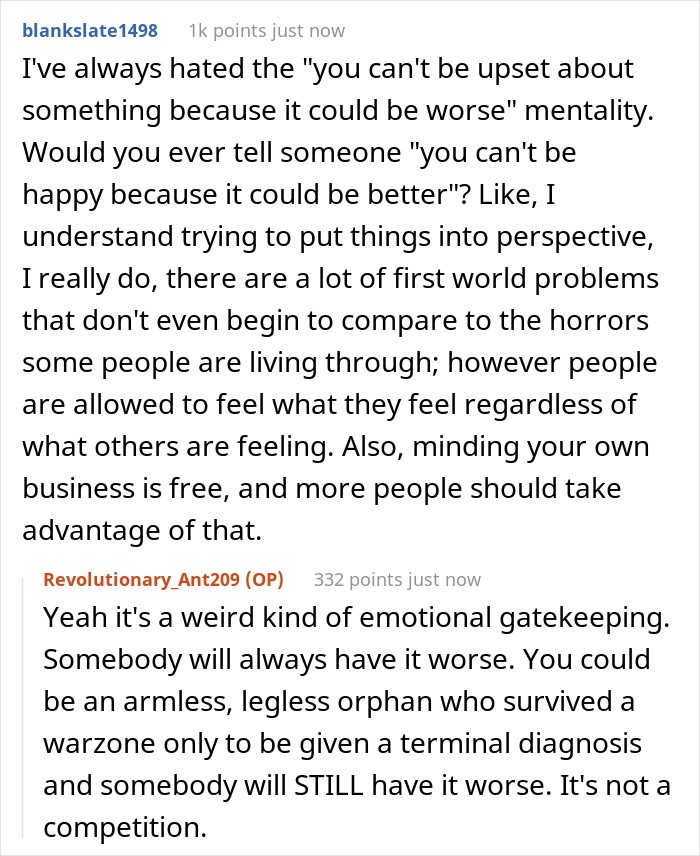 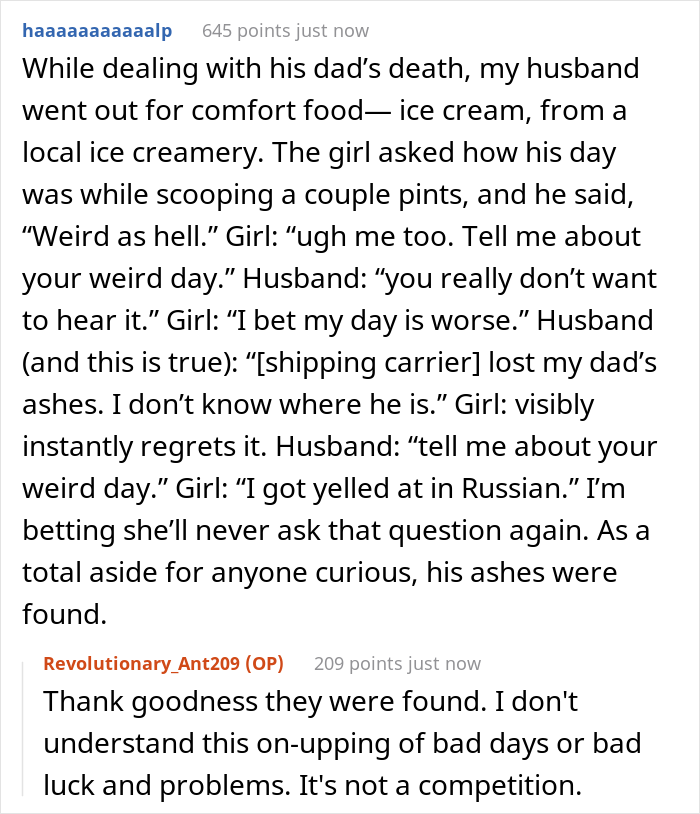 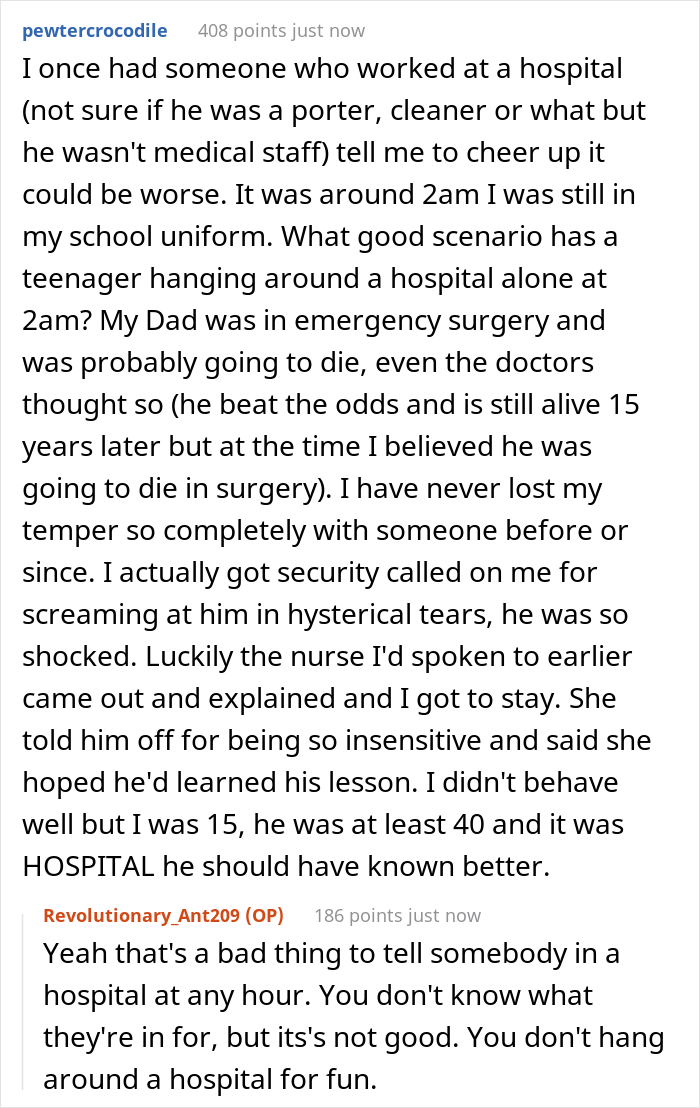 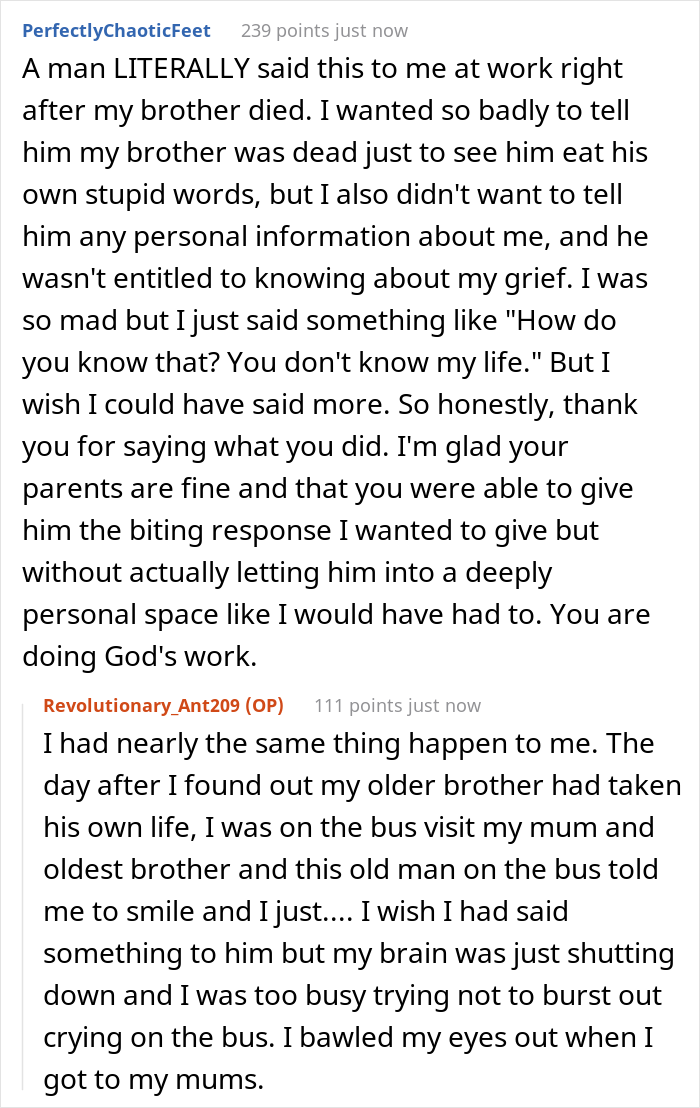 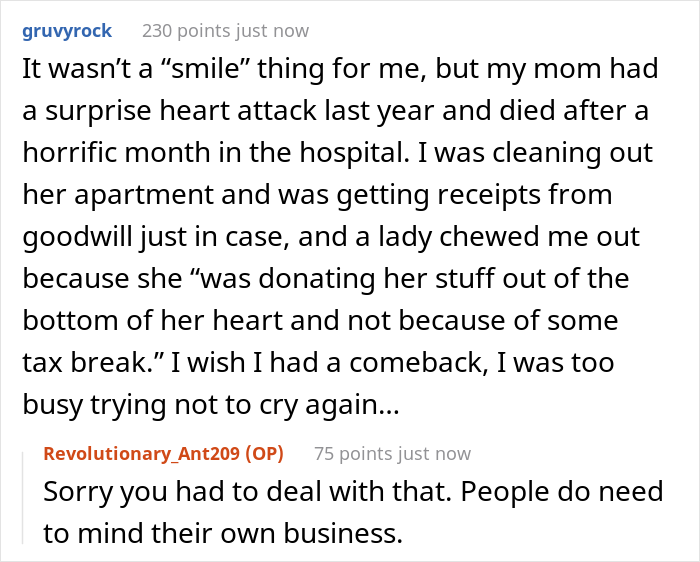 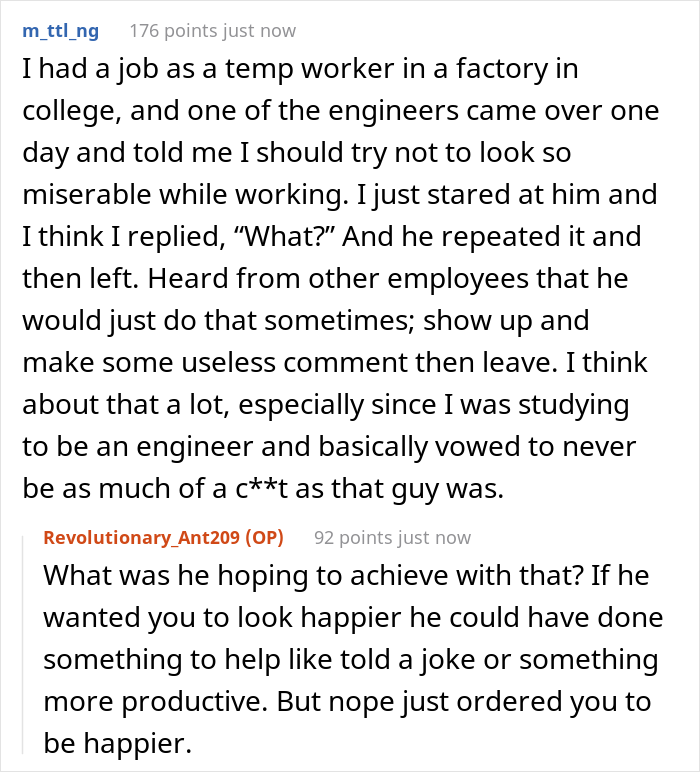 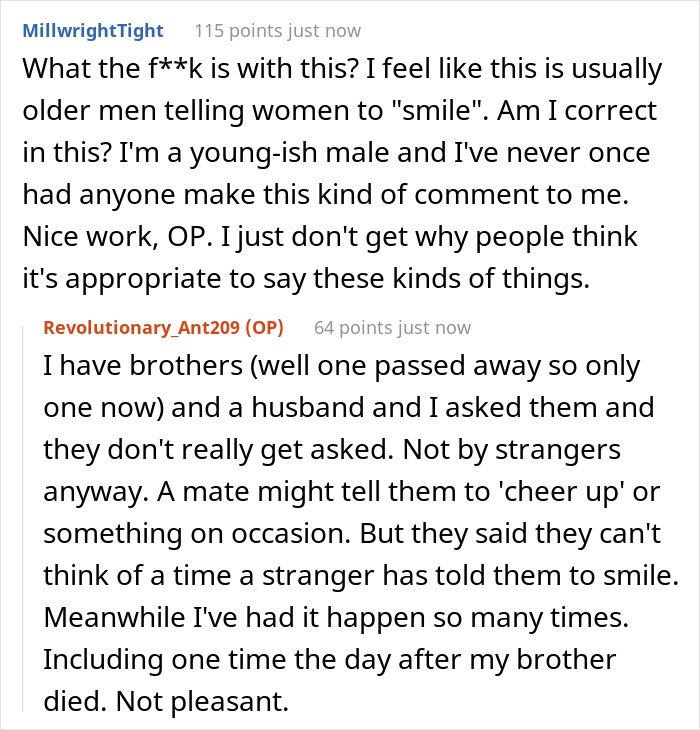 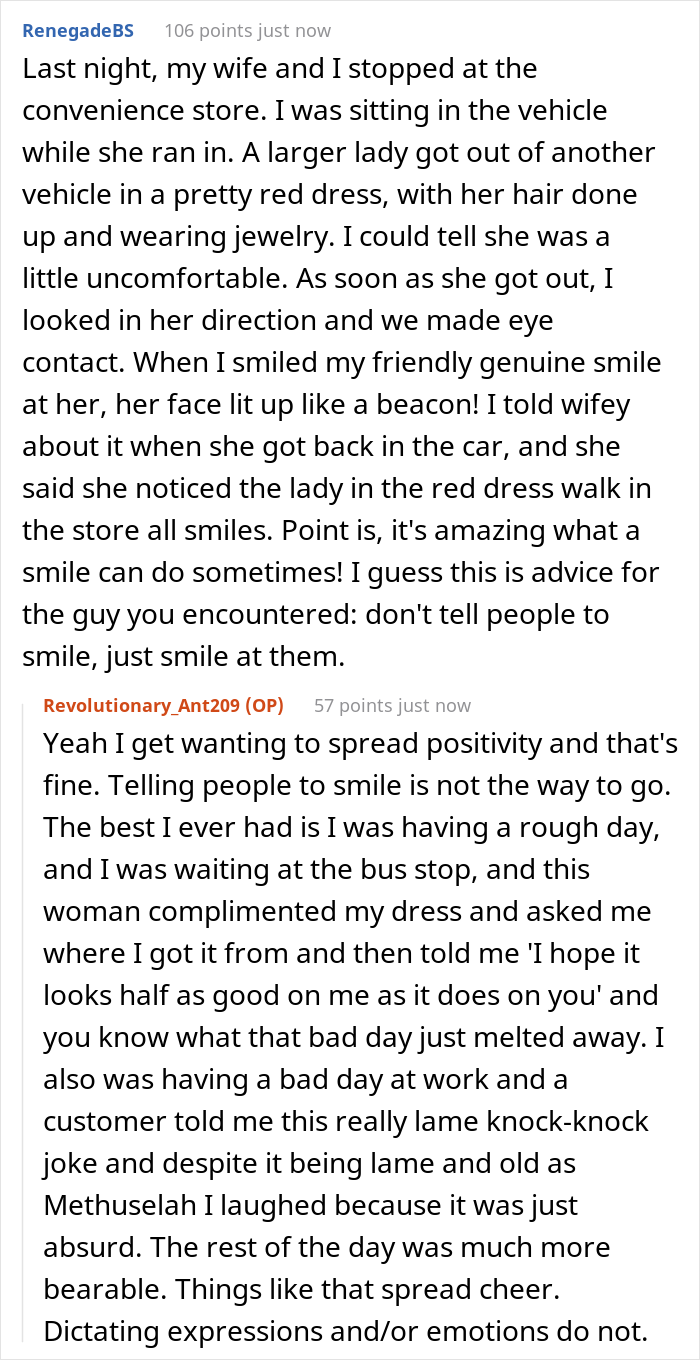 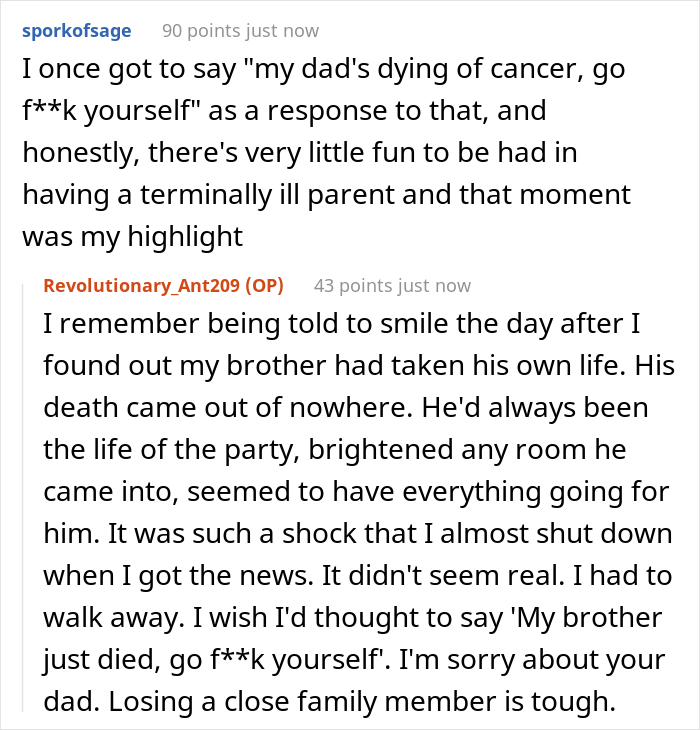 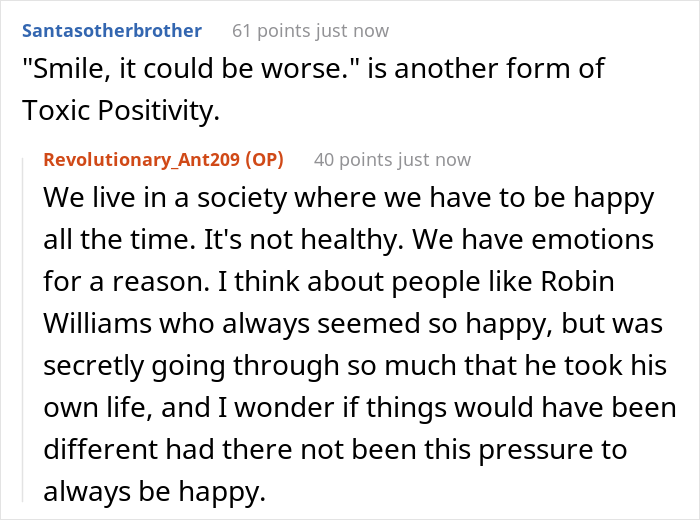 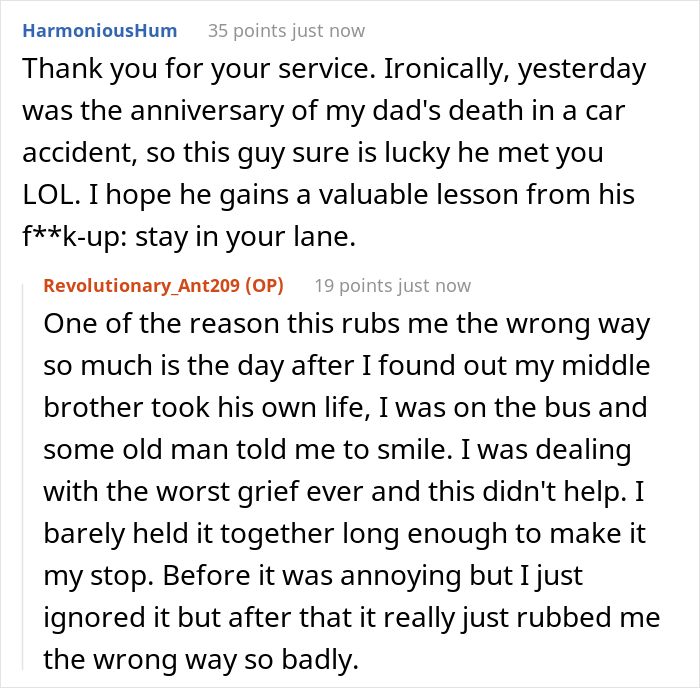 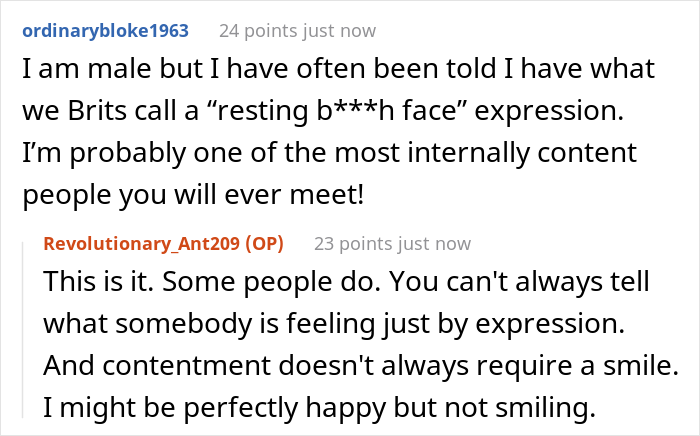 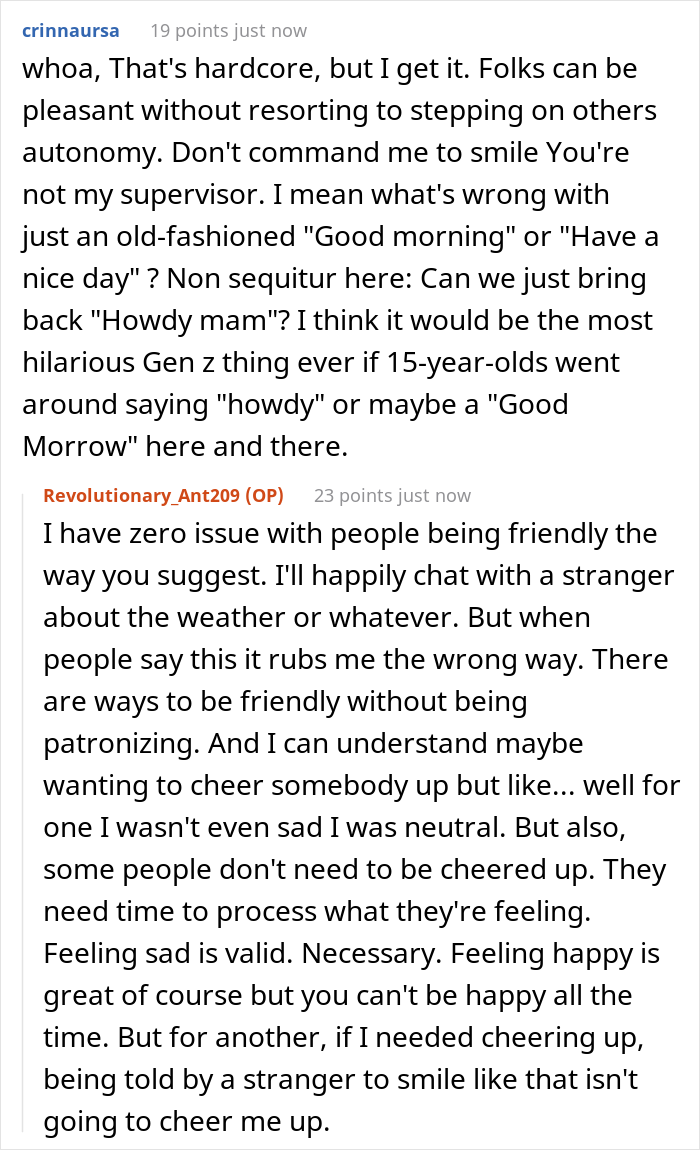 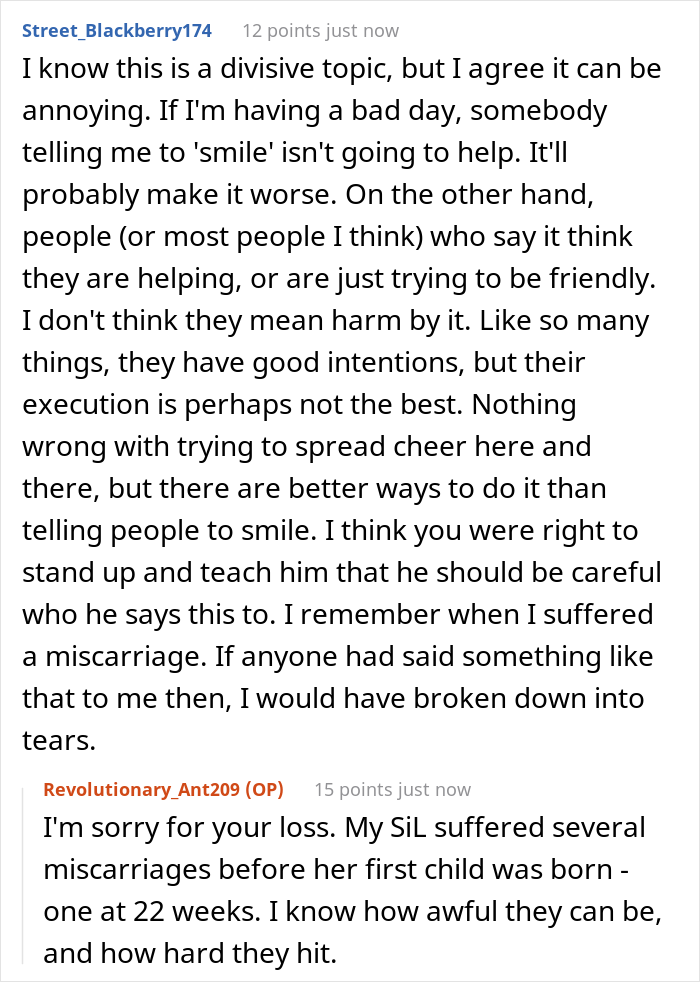 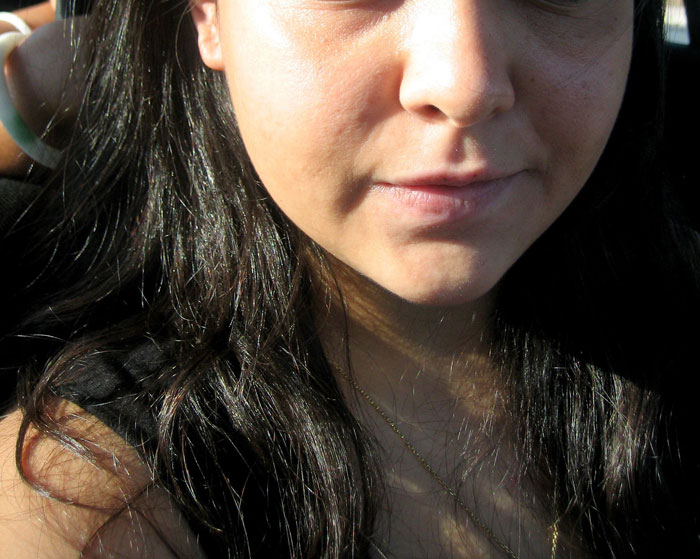 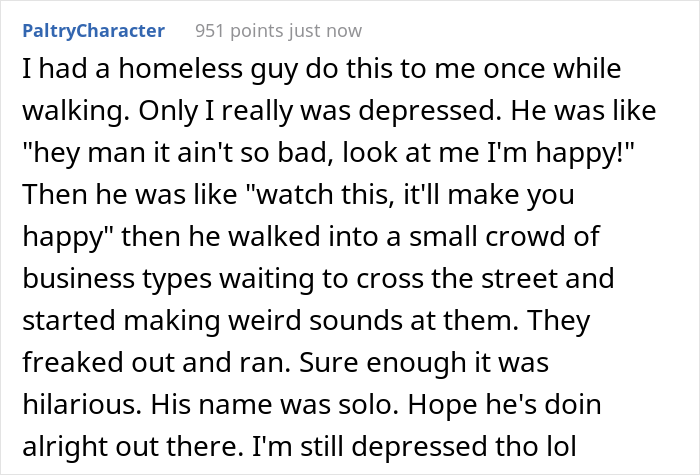 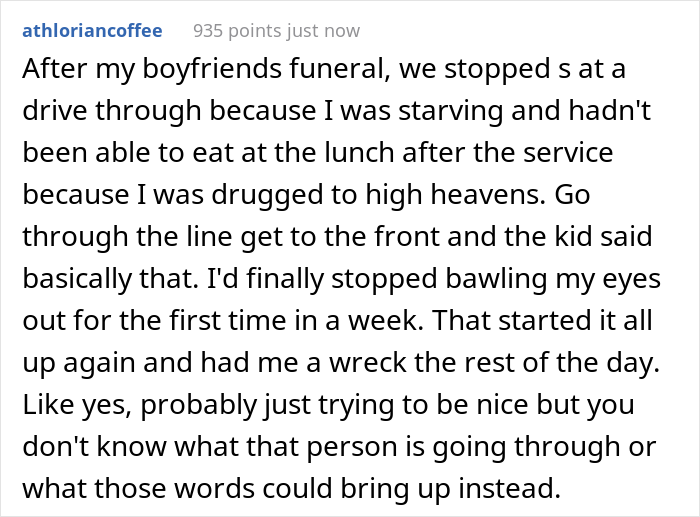 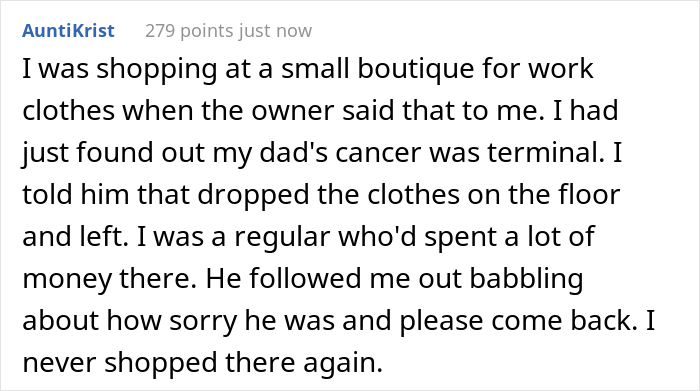